Brothers and Sisters, we must free ourselves from the consuming money powers and the immoral habits that these have brought. Capitalism should not divide us any further, so that we remain each other’s enemies. We are all brothers and sisters. It can be different, it must be different.

Today, the realization that we are all brothers and sisters seems further away than ever. The wars has never really ceased, only the opposing armies have changed. We have forgotten this ancient brotherhood. It has disappeared from our collective consciousness.

This Awareness must return. But how?

It is the form of this Western society, the uncontrolled hunt for more money and power and the interwoven system of governments, industries and financial powers that forms the engine and is responsible for the destruction of our planet and ourselves. Businesses, capital (capital flows) and national economies must grow and pollute everything. The lowest instincts of greed and satisfaction of the individual are addressed to legitimize the case.

The money system must be cast aside. The present-day interest-bearing money system leads humanity into slavery. Man must obey the pressure of money and be incorporated in the consumer-competition culture. The result is that people have become like zombies, colorless. Without spiritual growth, which is important for the development of man and without ideals.

Many of us feel that our present way is not the one for which we were born. Leaders do not lead us, but use us as pawns. So many of us want to raise their children with hope in their hearts, but cannot break free of our responsibilities.

Today the ‘yellow vests’ protesters are active, in the land of the revolutions. Where once a France was created of ‘Freedom, equality and brotherhood’. The revolutionaries made frequent use of political mottoes and slogans to propagate their ideals. The yellow vests now have slogans like; ‘Humanity over money,’ ‘Fuck the system’ and especially the latter is extremely of great importance, what should connect us, should fraternize us; “We are the 99%.”

Before the ‘yellow vests’ there were many other protest organizations, most with good intentions. However, unfortunately they always attract malcontents from both the extreme right and the radical left. The ‘ruling class’ knows exactly how to tackle such protests. Using chaos and violence, so that the real intentions are overshadowed and disappear in the background. Fighting violence with violence only leads to more and greater violence, so violence leads to nothing and to more division and oppression. As a result, divide-and-rule politics still reign and the real causes arise their responsibility and become even more powerful.

But when the people are fed by good leaders, they are nourished with the virtuous qualities of man, although there will always be bad people. Good qualities such as joy, peace, love, hope, serenity, humility, kindness, benevolence, empathy, generosity, truth, compassion and faith in ourselves.

It is the individual and the system between which we choose

The original inhabitants of America also entertained a form of democracy, which is much more democratic than the contemporary capitalist system. A circle of ‘elderly’ chose a leader, a chief, on account of his abilities and good behavior. A leader always had to take into account that his people consisted of free individuals, on whom he could not impose his will at leisure. He was in the service of the people and not the other way around. Dictatorial, narcissistic, psychopathic warriors got little chance.

How can you own the Air?

I would like to leave the closing statements to the original inhabitants of America, as chief Seattle of the Dwamish tribe said in 1854,

The great chief in Washington has spoken: He wishes to buy our land.
But how can you buy or sell the air, the heat of the land? That is difficult for us to understand. If we cannot possess the marvels of the air and the rippling of the water, how can you buy it from us?

The white man does not pay attention to the air he breathes. As a man who has been dying for many days, he is numb to bad fumes. 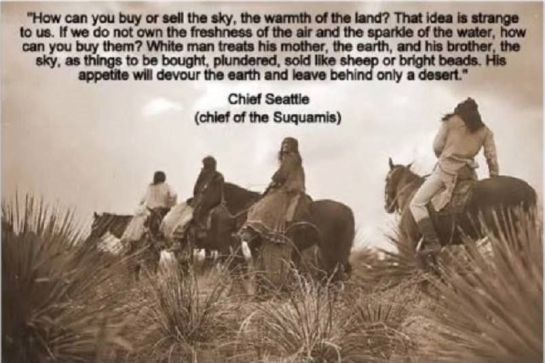 “It was our belief that the love of possessions is a weakness to be overcome. . . . Children must early learn the beauty of generosity. They are taught to give what they prize most, that they may taste the happiness of giving. . . . The Indians in their simplicity literally give away all that they have—to relatives, to guests of other tribes or clans, but above all to the poor and the aged.” ― (Ohiyesa)

The agreements made by the great chiefs in Washington with the Native Americans have never been fulfilled. Not much has changed.

“We have not only accepted the institutional parasitism of our governments, corporations, and religions, we have adopted it. We have submitted to fascism and adopted being fascists so as to get a bite of the proverbial filet mignon. We are a culture of separation. Most people in this state seek to put you in a box when they meet you and when/if you do not fall in line with the cliches they emit and understand they are frustrated. This is because most people are accustomed to separating themselves from others so as to justify the predicament they are in and the predicament they perpetuate upon others.

The Christmas wish of ‘White Rose Evolution’ is to fraternise and to make clear to the elite that people and planet are more important than money and economy. Next generations also have rights for a better future. Let love, peace and wisdom rule. Let us continue to realize that we are all one, and revive the brotherhood of the nations.

I’m Peter van Els, born in 1957, living in the Netherlands. Autodidact. Life is my greatest teacher and i started writing end 2015, to stand up against lawless and corrupt governments and the real power, the shadow government, the world elite. “Enough is enough” . I said to myself, and besides, I think it’s a moral obligation towards our earth and our posterity. I believe that all the good souls should be connect and unite in love, so we can change the system for the benefit of our planet and our posterity.For Worldpeace and Prosperity for all. Phone: 0031633819185