By Liz Kimbrough, via Global Research

Thanks to Wake Up World

Chances are, the works of the world’s insects touch your lips every day. The coffee or tea you savor, both are insect pollinated. Apples, oranges, cabbages, cashews, cherries, carrots, broccoli, watermelon, garlic, cinnamon, basil, sunflower seeds, almonds, canola oil — all are insect pollinated. Honey, dyes, even some vaccines require insects to come to fruition.

Vital to the world’s food web, nested in nutrient cycling, and embedded in industries — the closer we look, the more we see insects as vital to maintaining life’s frameworks. Referring to this fact, famed biologist E.O. Wilson wrote in 1987, “[I]f invertebrates were to disappear, I doubt the human species could last more than a few months.”

Which is why the precipitous decline of insects is raising alarms.

Insect populations are being reduced at varying rates across space and time, but on average, the decline in their abundance is thought to be around 1-2% per year, or 10-20% per decade.

“Think of a landowner with a million-dollar house on a river that’s a little bit wild. And they’re losing 10% to 20% of their land every decade, and it’s horrifying. It means that after even a century, you really don’t have anything left,” David Wagner, an entomologist with the University of Connecticut told Mongabay in an interview. That, he says of this comparison, is the danger we now face.

Wagner has just edited a newly released in-depth feature in the Proceedings of the National Academy of Science, Global Decline of Insects in the Anthropocene, in which 56 researchers present scientific studies, opinions and news on insect declines. The journal offers perspectives on the ecological, taxonomic, geographical and sociological dimensions of insect declines, along with suggestions on how we move forward to study and reverse this drain on global biodiversity.

Insect “death by a thousand cuts”

In a perspective piece that leads off the special issue, Wagner and his co-authors address the likely causes of insect decline. The main stressors to insects, they write, are changes in land use (particularly deforestation), agriculture, climate change, nitrification, pollution and introduced species. However, the importance of each stressor and how they interact still puzzles scientists.

“There’s so many good scientists that can’t figure out what the cause is,” Wagner said. He poses the well known honeybee as an example. “I mean, this thing is worth billions upon billions of dollars and we don’t know why it’s having such a hard time. And I think the reason is, it’s death by a thousand cuts… most of these things are hit by four or five pretty important stressors, and they’re acting synergistically.” 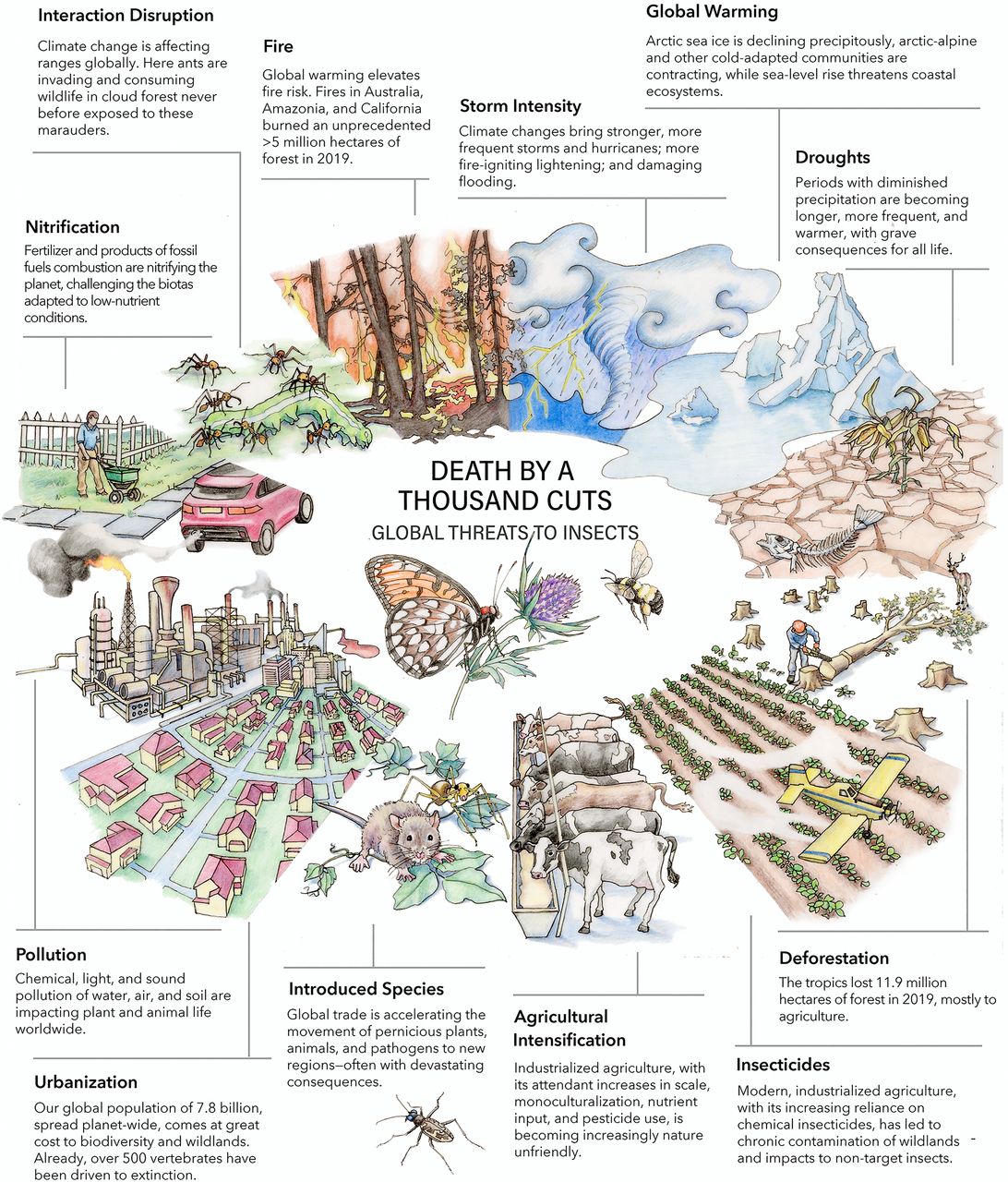 A study by Wagner and Peter Raven, president emeritus of the Missouri Botanical Garden, concludes that declines in insect biodiversity and biomass are linked to the intensification of agriculture over the past 50 years.

Research by Dan Janzen and Winnie Hallwachs — both biologists from the University of Pennsylvania who describe themselves as “intense observers of caterpillars, their parasites, and their associates” — focuses on climate change as a stressor. Since the late 1970’s, they write, they’ve watched as insect declines came to the dry forests, cloud forests, and rainforests of Costa Rica’s Guanacaste Conservation Area, as the region was plagued by rising temperatures, increasingly erratic seasons and inconsistent rainfall. 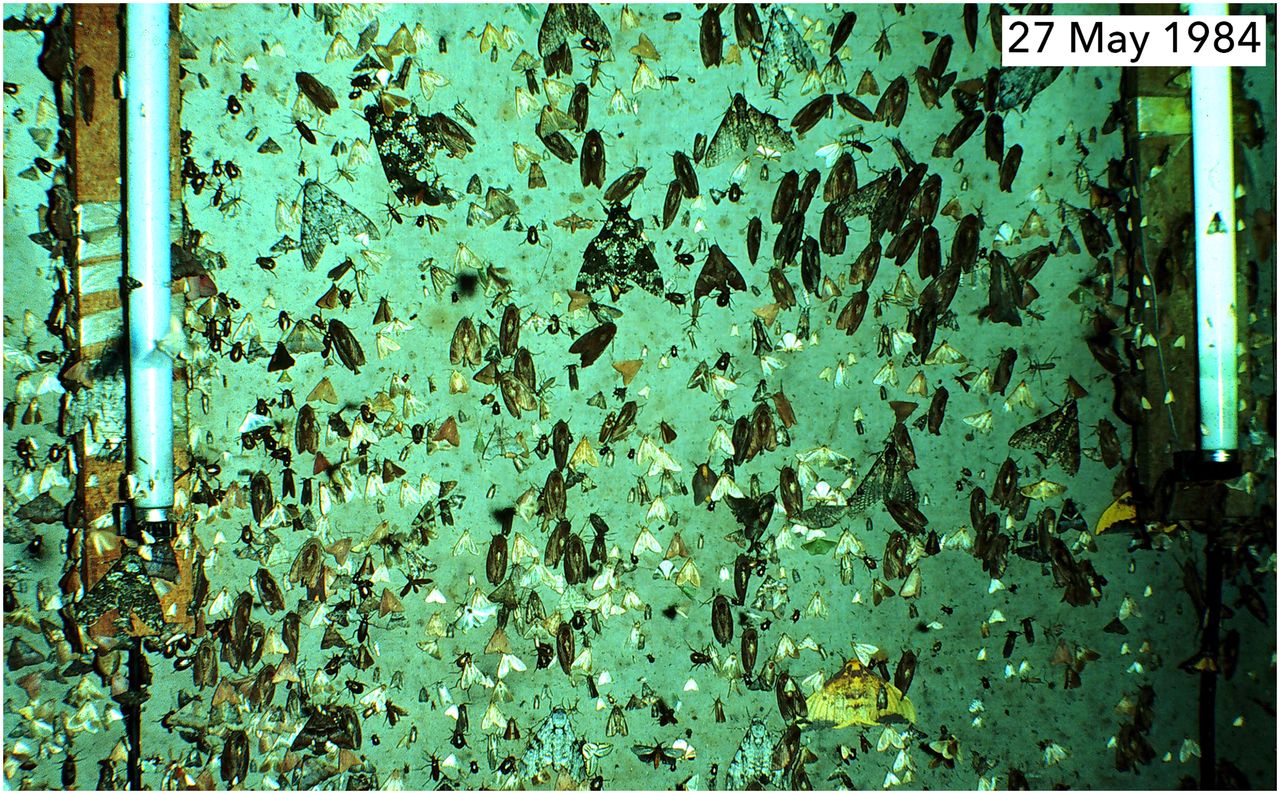 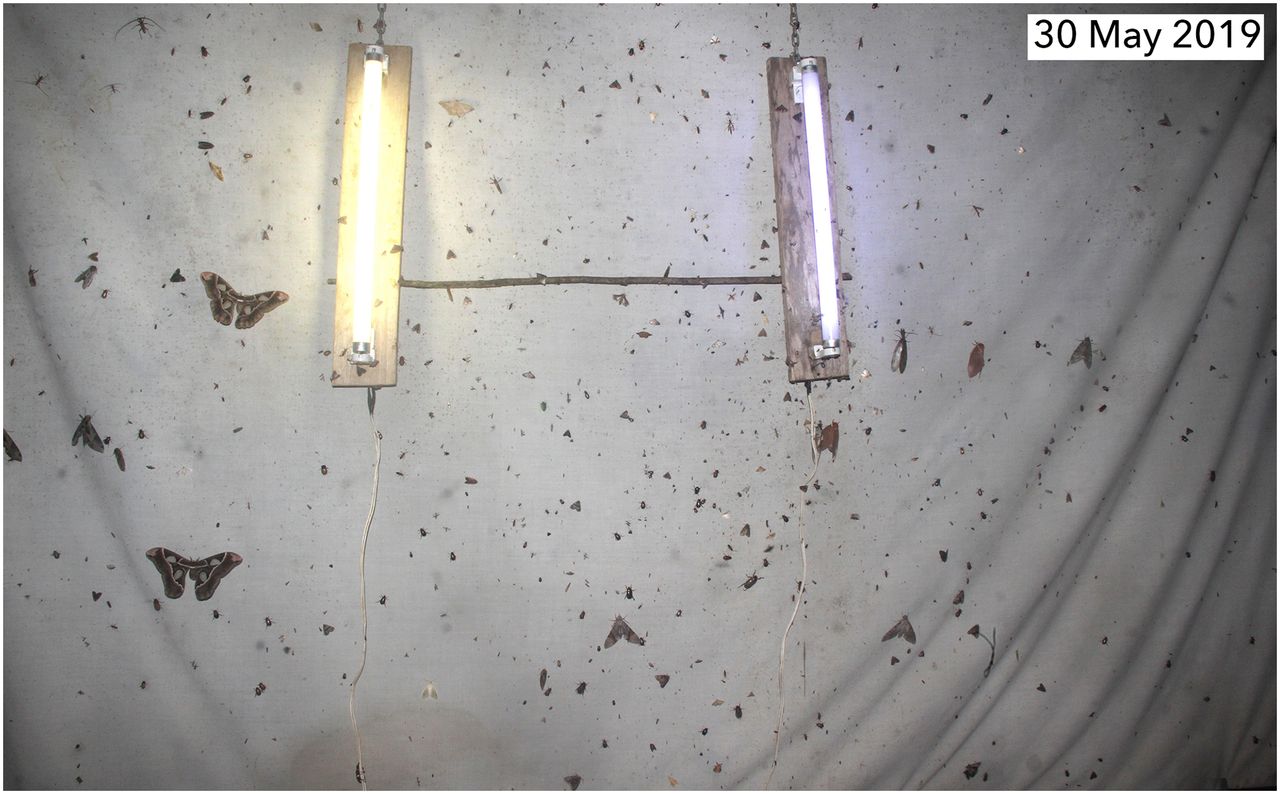 The top figure shows a normal 1980s assembly of moths at the Cliff Top light trap in dry forests of Costa Rica’s Guanacaste Conservation Area. The bottom figure is in the same location in 2019, during the same time in the moon cycle. “This dramatic change in moth density and species richness has now come to represent light trap catches in the  dry forest at the beginning of the rains,” the authors say. Images from Janzen and Hallwachs 2020.

Another study in the special feature, titled, Insects and recent climate change, argues that climate may be playing even more of a role in declines than land use change — which is massive around the planet mostly due to agribusiness expansion. The authors base their climate findings on a Northern California butterflies case study, where declines were severe even in areas suffering little habitat loss. Similar losses within well-protected areas have been detected in Germany and Puerto Rico.

Likewise, butterfly populations in Europe face challenges. In the UK, butterfly numbers have declined by around 50% over the past 50 years, with 8% of known resident species considered extinct. In the Netherlands, upwards of 20% of species have been lost and in Belgium 29%. Researchers suggest habitat loss, habitat degradation and chemical pollution as the primary causes. The authors offer conservation solutions and recommend policy changes to conserve butterflies and other insects — but so far political will has been lacking.

Moving from the winged creatures of the day to night fliers, Wagner and colleagues give an overview of the global state of moth declines. Moths are extremely diverse and cosmopolitan. “For every butterfly that Mongabay readers see during the daytime, there’s 19 species of moths flying around at night,” Wagner revealed.

Although moth numbers have declined in some areas, such as in parts of Europe and Central America, in other, mostly temperate areas, many moth taxa are increasing in abundance. Another study found that the overall abundance of arthropods in the Arctic has increased in recent years. Researchers attribute these increases in insect abundance to climate change, which scientists say has both its species winners and losers. As warmer temperatures march northward, new suitable habitats open up for insects. The consequences of this range expansion — and the conflicts which may occur with plant and insect species already occupying those ranges — have yet to be analyzed. 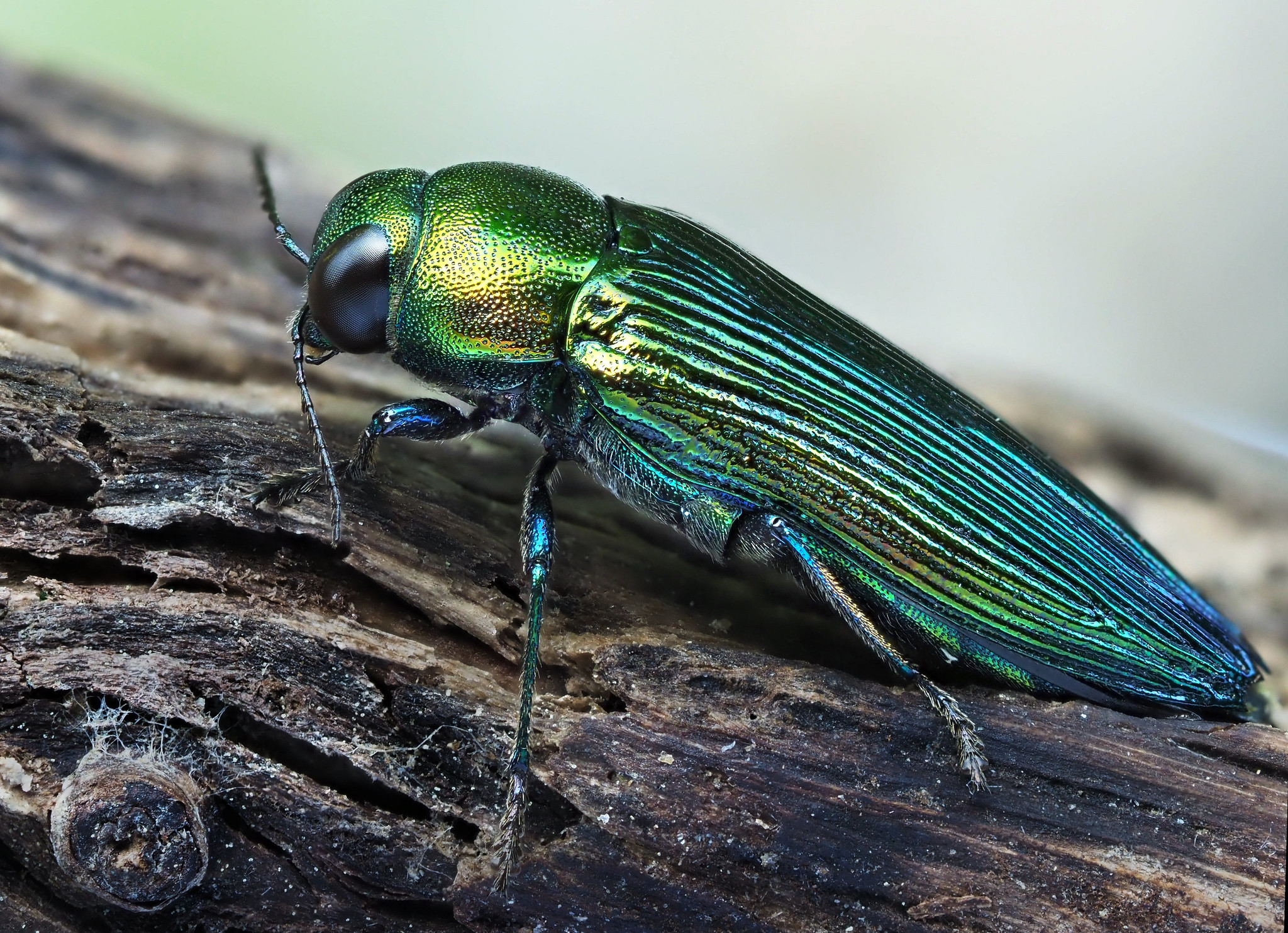 The oak jewel beetle (Eurythyrea quercus) is one of the most endangered beetle species in Europe and requires old, dry oaks to develop, which are seldom left in the landscape. Photo by Frank Vassen via Flickr (CC BY 2.0)

Insect declines are emblematic of a larger problem: the earth is in the midst of what some call the “sixth mass extinction.” Birds, amphibians, freshwater mussels, large mammals, all have seen dwindling numbers. The question for entomologists, Wagner said, is whether or not the decline of insects is actually occurring faster than for some other groups, especially because insects are often the direct target of destruction by human, due to pesticide and herbicide use.

Sarah Cornell, a scientist at the Stockholm Resilience Centre (SRC), raises a insect-related question relevant to our time: “There might have been many more mass extinctions. It’s just that we only see extinctions with the things that leave a record… things with skeletons… When people [say], ‘we’re entering the sixth mass extinction.’ Okay, well, how do we know that? We might be entering the 17th?…We might make ourselves extinct before we even reach these hallowed glories of the sixth.”

Clearly, the loss of insect abundance — depending on where and how fast it occurs — could have far more dire, unforeseen impacts than the loss of coffee or cashews. Wholesale transformation of global ecosystems, triggering mass insect declines, could be pushing the Earth past what scientists have dubbed as a “planetary boundary.”

The planetary boundaries framework, postulated by a group of international scientists in 2009, attempts to set the environmental limits within which life can safely function, and asks the question: how much human-caused disturbance can the planet take without shifting into a new and/or riskier state?

According to a 2016 analysis, humanity has passed the “safe” planetary boundary threshold for “biotic intactness” a measure of functional and genetic diversity (biodiversity). Biotic intactness has declined across at least 65% of the Earth’s terrestrial surface, the authors say, especially in grasslands and biodiversity hotspots.

“The way that people (that’s us…) are using land is changing the capacity of ecosystems to continue doing their normal functions,” said Cornell, an SRC global change researcher who worked on a 2015 update to the planetary boundaries framework. “This pattern of lost biodiversity is undermining our own longer-term well-being.” 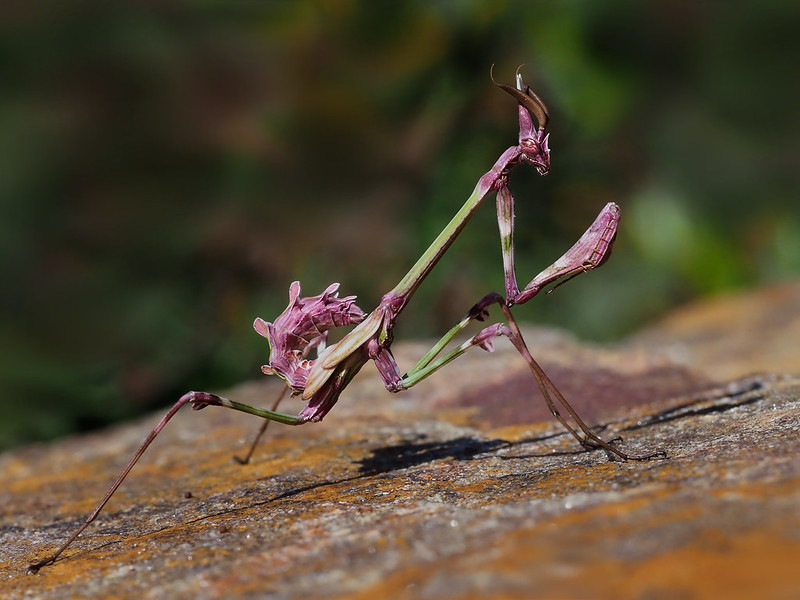 A conehead mantis (Empusa pennata) in Portugal. Because of its low-density distribution, this species is rarely found in the wild. Photo by Frank Vassen via Flickr (CC BY 2.0)

Insect declines will very likely get worse before they get better, Wagner warns, as climate change — a critical planetary boundary — worsens rapidly, and as both human population and human consumption skyrocket, resulting in greater land use change and increasing pollution — two other planetary boundaries.

Importantly, the Global Decline of Insects in the Anthropocene special feature identifies critical gaps in our knowledge. For starters, we have only scratched the surface of identifying and describing the planet’s existing insect biodiversity. Entomologists are working aggressively to advance our understanding via deep learning and computer vision — using a variety of cameras and sensors — and ambitious initiatives such as a plan to inventory and DNA barcode the entire biota of Costa Rica over the next ten years.

You can help save the world’s insects

The new feature doesn’t only sound the insect alarm, it also offers many suggestions about how to conserve and protect these tiny invertebrates. International, national and corporate policymaking needs to happen, and quickly.

In the final piece, researchers lay out, “eight simple actions that individuals can take to save insects from global declines.” One action urges people to convert lawns, or any green outside space, into more diverse natural habitats. 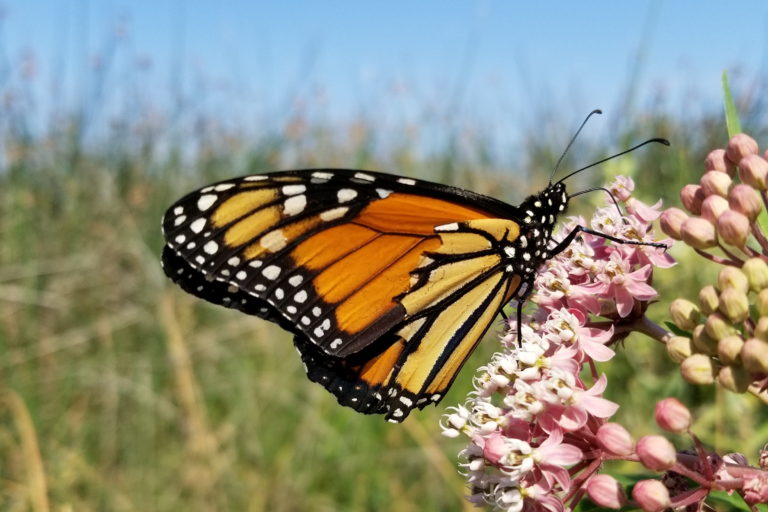 Monarch nectaring on swamp milkweed (A. incarnata) in Idaho. Monarch populations have declined dramatically and the species is now qualified for listing under the US. Federal Endangered Species Act. Photo courtesy of Stephanie McKnight / Xerces Society.

The paper recommends growing native plants; using less herbicides and pesticides; limiting the use of exterior lighting; lessening runoff created when washing vehicles and buildings; working to counter negative perceptions of insects; educating others about insects; and getting involved in local politics, supporting science, and voting.

“I think if we all did it together… it would make a very big difference,” Akito Kawahara, lead author of the eight simple actions paper told Mongabay. “Even just the lawn thing… taking a little tiny piece of your lawn and converting it to a natural habitat… the impact that a small piece of space can have on the grand scale is enormous.” Butterfly gardens and other such spaces also enrich our lives and offer educational opportunities for awakening natural wonder in children.

“These insect papers, the focus on the small things, is a really delightful return to thinking ecologically,” Cornell told Mongabay. “It’s not all about counting stuff. How many insects? How many extinctions? But rather we need to ask, how is this world changing?”

In a world with unchecked insects declines, the answer may be: more than we dare to imagine.

This article originally appeared on GlobalResearch.com and is reproduced here under a Creative Commons licence.

Liz Kimbrough is a staff writer for Mongabay. Find her on Twitter @lizkimbrough