The town of Chipman, New Brunswick, a village of some 1,100 people about 60 kilometers east of Fredericton, was host to the latest dustup on gender and sexual preference. It provides an interesting context for a deeper discussion about how to promote acceptance, equal rights, and freedom of expression for all human beings in our communities. Here is the story from this CBC article in a nutshell.

On Sunday, October 21, a ‘straight pride’ flag was raised in the heart of the village of Chipman, NB. For those who have never heard of a ‘straight pride’ flag, like myself before I had read this article, the flag has a background of black and white horizontal lines which may or may not depict interlinked male and female symbols on top of them. It has been raised by some conservative groups in the U.S. in response to gay pride events.

In June, the village council had gone ahead for the first time to raise an LGBT pride flag in support of the LGBT community. A group of 11 Chipman residents headed by Glenn Bishop had met since to find ways to show support for straight people. Bishop had gone to the mayor about two months ago and asked to fly the flag. According to Bishop, the mayor said, ‘Sure we represent all groups of people.’ Subsequently, the council voted unanimously to raise the flag on October 21.

The appearance of the flag was met with outrage from some residents. When Margaret Clark first saw pictures on Facebook of the flag waving in the heart of the village, she said she felt as if she’d been kicked in the stomach. Her son is a gay man who was bullied when he was at the local high school:

“It’s just like they created a time machine and they put us back 10 years. To put up a straight pride flag is almost like putting up a swastika. It’s scary in this day and age — it’s 2018… It represents hatred: ‘We’re going to show them that us white, straight people are better.” –Margaret Clark

Less than half an hour after it was taken down, Bishop arrived and asked “Who took down my flag?” Members of the LGBT community who were standing there said, “We did,” and an altercation ensued. Bishop argued that he never meant to offend anyone and that they were being “sensitive.” Bishop maintains that “We are not against the gay pride people at all. I’m not against gay people; anybody’s sexual preference is their choice.”

But resident Mat Miller (seen holding an LGBT pride flag while arguing with Glenn Bishop, right) saw things differently. He and others said Bishop didn’t understand how the flag makes light of the struggle of being gay or non-binary. 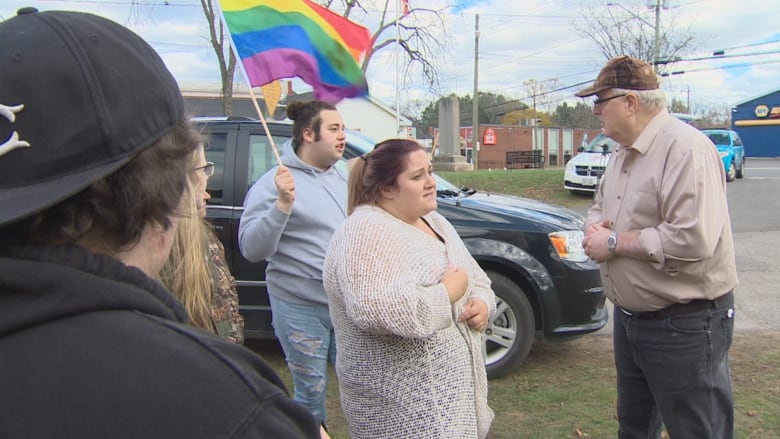 “You’re against them by putting the flag up,” Miller told Bishop. “There’s no such thing as straight pride.” Miller said he’s happy to see the flag is down, but he still expects an apology from the mayor and council.

The council said later that the backlash against the raising of the straight pride flag included “personal attacks and threats” against councilors. The village council said Sunday’s flag raising was meant as a show of support to “all groups in our municipality and to respect everyone’s right to freedom of speech.”

“No harm or hate was intended in any way as we pride ourselves on Chipman being a diverse and vibrant community. This flag distraction is a lesson for us and for other rural communities such as our own.”–Council statement

If there is one thing in all this that I’m in full agreement with, it is that last statement that ‘This flag distraction is a lesson for us.’ The question is, how many have actually gleaned the true lesson contained therein?

Here’s an idea, some have mused. Those who are straight, and would like to show support for straight people but in so doing want to make it clear that they hold nothing against members of the LGBT community, like Bishop claims, can combine the two flags together and identify as a straight person who is an ‘ally’ of the LGBT community. Problem solved, right?

Alas, not exactly. As well-meaning as this effort may be, it still ultimately causes division, because it discriminates between heterosexuals who self-identify as ‘allies’ of the LGBT community and those heterosexuals who don’t. And anything that continues to subdivide us is not a lasting and all-inclusive solution.

The Trouble With Flags

The root of the problem here stems from what the action of flying a flag actually means. A flag is a representation of something: an idea, a nation, or in this case, a segment of the population. But because the LGBT flag and the straight pride flag each represent one part of the population at the exclusion of the other, the flying of these flags can be divisive when they are supposedly being ‘endorsed’ by representatives of a whole population (i.e. a village council).

The village council of Chipman, who seem well-meaning, missed the mark by agreeing to hoist either flag in the heart of the village. Firstly, because it is not necessary for the council to endorse a group which represents a segment of the population in order to safeguard their freedom of speech; freedom of speech is an individual right, as only one individual can speak at a time. So members of the LGBT community each have the right to speak freely. A group literally cannot ‘speak,’ and even a representative who speaks on behalf of a group, is still exercising their individual right to free speech.

Secondly, neither flag actually embodied the town’s desire to be seen as diverse and inclusive. In fact, when the representatives of the people (the council) endorse a flag as a community, they are essentially excluding one segment while making the other one special. But members of the LGBT community are not special, in the same way that non-members are not special. We are all equal.

When the LGBT community raises their flag within their own community, then it becomes a symbol of unity through diversity, an inspiration for people of different orientations to come together and feel accepted and welcome. But this flag will not go very far in bringing whole communities together, unless it is changed so that ALL people are represented on it. And the same is obviously true for the ‘straight pride’ flag.

The ultimate destination of human evolution is for us to come together as one. While any particular group’s struggle for acceptance and equality in society may be a noble one, their is always the danger that it solidifies into a permanent identity founded on victimhood. It is only once this identity is fully transcended, the group’s collective ethos embodies the love and acceptance towards all of society that they want the rest of society to provide them with, do they become agents of change that actually helps to bring the entire collective together.