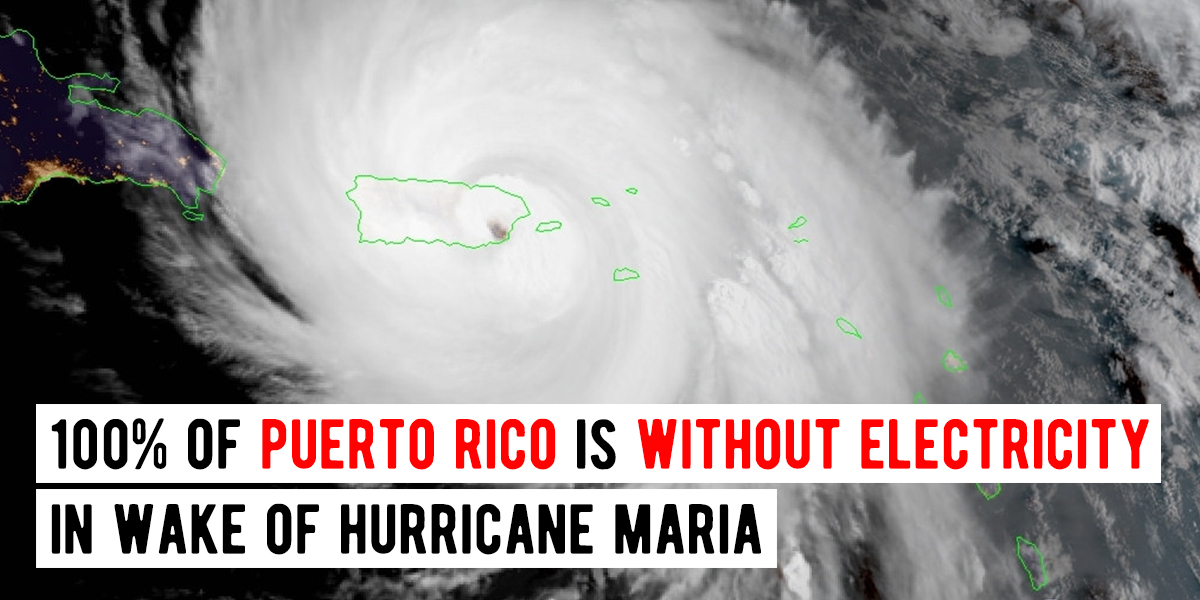 In the wake of Hurricane Maria, 3.4 million people in Puerto Rico have been left without power. Maria devastated the territory. It flooded towns, blew out windows at hospitals and police stations, crushed homes and knocked out the entire electrical grid. Phone and internet services have also collapsed in Puerto Rico, leaving many people isolated and without communication.

Mayor of the capital San Juan, Carmen Yulín Cruz, said: “The San Juan that we knew yesterday is no longer there. We’re looking at four to six months without electricity.” Gov. Ricardo Rossello also said “we all knew this was going to happen given the vulnerable infrastructure”. He went on to say “there’s a humanitarian emergency here in Puerto Rico….this is an event without precedent.” Felix Delgado, Mayor of the Northern coastal city of Catano said: “Months and months and months and months are going to pass before we can recover from this.”

Maria was the strongest hurricane to hit Puerto Rico in 80 years. The entire island has now been declared a federal disaster zone. The Government has hired 56 small contractors to clear trees and put up new power lines. In addition, the Federal Emergency Management Agency (FEMA) said it would would fly three to four military planes – carrying water, food, temporary shelter and generators – to the island every day. Rosello also said that his administration were trying to open ports as soon as possible so that they can receive shipments of food, water and other important supplies.

Mike Hyland, Senior Vice President of Engineering Services for the American Public Power Association would not comment on how long it would take to restore power in Puerto Rico. But he did say: “This is going to be a tall lift.”

Before the hurricane, the grid was already in a dire condition. The territory’s $73 billion debt crisis had left the state power company broke. Due to the fact that basic maintenance was abandoned, the island was subject to regular blackouts. The economic crisis led to the mass departure of half a million Puerto Ricans to the US mainland.

Edwin Roasario, 79 is a retired government worker, he said: “Only us old people are left. A lot of young people have already gone. If we don’t unite we’re not going to bounce back.” Furthermore, Hector Llanos, a 78 year old retired New York police officer had planned to leave for the U.S. to live their temporarily. He added: “You cannot live here without power.” Like many Puerto Ricans, Llanos does not have a generator or gas stove. “The only thing I have is a flashlight,” he said, shaking his head. “This is never going to return to normal.”

THIS ARTICLE IS OFFERED UNDER CREATIVE COMMONS LICENSE. IT’S OKAY TO REPUBLISH IT ANYWHERE AS LONG AS ATTRIBUTION BIO IS INCLUDED AND ALL LINKS REMAIN INTACT.