Video: This is How Banana Peels Could Help Detect Cancer Non-Invasively

When bananas start getting black spots all over them, they either become banana bread or trash, but the uses don’t stop there! Scientists have actually found that they might be useful in both detecting and treating skin cancer.

Those black spots contain tyrosinase, an enzyme also present in human skin, and in even higher amounts in people with melanoma, a potentially fatal form of skin cancer.

The disease causes telltale spots that are caused by a malfunction in the regulation of tyrosinase. This malfunction disrupts melanin, which gives skin its pigment. People with melanoma have a 10-year survival rate of 95% if the cancer is detected in stage 1, according to the American Cancer Society. But the survival rate drops to 43% by mid-stage 3. [1]

A team of scientists at the Laboratory of Physical and Analytical Electrochemistry in Switzerland developed a cancer “scanner” and tested it on banana peel spots, which are approximately the same size as melanoma spots on human skin.

“By working with fruit, we were able to develop and test a diagnostic method before trying it on human biopsies,” team leader Hubert Girault said in a statement.

Then, the scanner was used on skin.

The researchers concluded that tyrosinase is a reliable marker of melanoma growth.

The next stage of the research will involve using the scanner to view melanoma tumors and remove them.

“Our initial laboratory tests showed us that our device could be used to destroy the cells,” said Dr. Girault. [2] 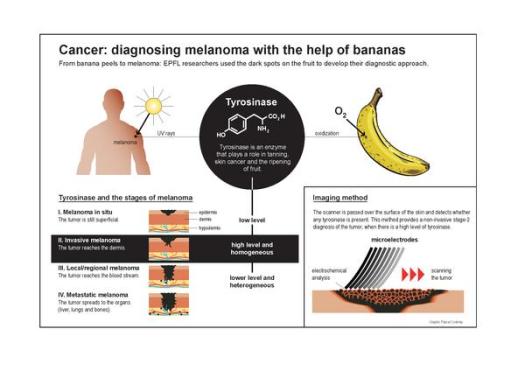 Currently, a biopsy is needed to accurately diagnose melanoma. The researchers hope their discovery will someday eliminate the need for painful, frightening tests.

“This system could obviate the need for invasive tests like biopsies,” the team said.

Check out these other 4 banana health benefits.