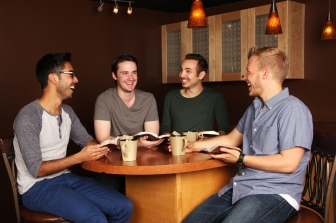 There are numerous quotes on social media on what ‘real men’ should or should not do, how we have to behave, what to believe or what to say. While I understand the intention of such memes, often debatable, and that in many cases only serve to condition men into a new set of beliefs with the only purpose to satisfy someone’s ego or that of a collective, there are other ways, more loving and kinder to introduce new values in the male psyche.

Telling others that they’re not enough is how patriarchal society has been teaching for centuries.

The first question that raises is this; what is a man when he’s not a ‘real man’?

Let’s take this one as an example; “Real men love curves, only dogs like bones.” What I read from this is that when a man doesn’t like a woman with curves, he is a dog. This quote is not only written by an interested part, but it is also discriminatory to all women who are naturally slim or skinny. These women do not have to starve to keep their bodies in such shape. It is natural to them. Every woman deserves love regardless of the shape of their bodies. But so do men. It works both ways.

A man is naturally attracted to a certain type of woman. He might like a slender body in a woman, as many would prefer a more voluptuous one. The point that is being made here is purely physical, while everyone wants to be seen for who they really are inside. The irony!

Why can we just not all accept the diversity of humankind and seek a deeper meaning to our existence and broader understanding of the collective? Integration sounds like a good option instead of further promoting separation, discrimination or competition.

Any man should be entitled to make his own mind about that he likes or dislikes, in which way to behave or what to think. Through experience and living, a man will be able to grow and develop to be a better person, but when all he’s told is that he’s not good enough for this world, he will close down to new experiences and learn to distrust everything that comes from others. This is called freedom. And freedom is what every man wants. Freedom of choice and expression. There is not a human being alive that does not wish this kind of freedom.

In previous articles I have written about patriarchal society and its effects on men and women. What we have today is the result of centuries of indoctrination through fear and control. We are products of this society, but we also belong to it and it is everyone’s responsibility to change it for the better. Complaining about what we don’t like is not enough. We can’t blame society, sit down and wait for others to do the work for us.

While the actions of many men might be reproachable, not every man is a pedophile, a rapist or a murderer. As men, we also want to be loved and to love. We just don’t know how. Not yet. We need a break and certainly what we don’t need is being coerced into believing what only serves a group of people. The answer is in integrating diversity, so everyone is accepted for who they are regardless of what they look like.

It is true that men as a collective are behind compared to what we could be, but this is who and what we are right now and only by working together to create a better society we can create a better world. Women are not that far ahead either, and there is still a lot of work to do for both genders.

It is far too easy to blame men for everything that is wrong with this world. Centuries of tradition and education against the true nature of human beings cannot be changed from one day to the other. We have to work with what we have here and now. While I agree that the behaviour of many is wrong, I also know that this is the effect of generations of false beliefs and the natural inertia of what history taught us.

There are many other quotes about real men, one of them stating that a real man wouldn’t break a woman’s heart. While the intention of this quote is also understandable from the point of view that a man may create a false interest in a woman having ulterior motives to only satisfy his needs, it is also true that in our way to healing, heartbreak is necessary. If interested you could read more extensively on this subject in this article: Heart Break And The Death Of Ego.

To add injury to insult, some male public figures -not all- have also taken a superior stand to disqualify other men. Again, here we have another example of more discrimination and competition promoted by people whose only credibility is fame. Looking down on others makes their statements rather questionable. And if this is what a real man is supposed to be like, I definitely do not want to be one of them, because the underlying message is based on fear.

Anyone can inspire others by bringing the best in them, not by putting others down. Anyone is a leader. Anyone can teach anyone else to do something better and to improve themselves. There are no exceptions. Just about anyone is a teacher with their unique experience.

What is important to understand is that if we want love, we have to teach with love and from a place of love. Fear is never going to bring love to our lives. When humanity understand through feeling the true meaning of love, we will all transcend the physical, as well as our insecurities, fears and egos.

What men want is a childhood in which love is plentiful. To love and be loved. Not be shamed as children when expressing love, sensitivity or kindness. We want an education, a system and a society that tells us that our dreams are possible. That it is OK to cry and express our emotions.

We want a childhood in which we are not voiceless and invisible, taken for granted or pushed around. Men also want to be loved for who we are. An adolescence in which we are not pressured to lose our virginity at all costs. Men want equality. And an end to violence and competition. A world in which we all live in peace and harmony.

What we got instead was to fear freedom and self-expression. To insult the soul with every choice that is available in the current world. A world in which the feminine is something everyone should be ashamed of and how to fear it. We got boot camp instead of childhood. We were taught to be providers in a world that doesn’t provide for humankind, but we were never taught to be leaders.

All this we have to learn by trial and error, making innumerable mistakes because we don’t know the extent of the consequences. We want love and forgiveness. A second chance.

Everyone has been born in a world of halves, not of unity. A world of Egos, not of love. Let’s work together to shape a new one, where love, values and universal laws become natural. And let’s first find a conscience, both personal and collective. Then we can focus on a revolution of consciousness. One step at a time. We can’t build a new world from the top.

What the world doesn’t need is another tag that implies negative connotations.

Yes, there are many things men could and have to improve. Many things to regret, as well as taking responsibility for our actions, but nothing will ever change promoting more fear, manipulation and coercion. One day we will understand that the way to become better men is by becoming a better person, and this is not achieved by fear, but through love. Let’s create a better world through that love we long and never had.

Finally, this article remains unfinished and it is here for other men to add their invaluable contribution towards a better world. There are many out there and one day we’ll be majority. Up until then, let’s all work together.