Written by Wes Annac, The Culture of Awareness

I’ve said before that I think cannabis is a helpful spiritual assistant that, if used properly, can enable us to explore our consciousness and raise our vibration.

The well-meaning cannabis culture unfortunately fails to recognize the spiritual uses of the herb and encourages endless use that can lead to dependence if the user isn’t careful, and this could change if its spiritual uses were recognized or accepted.

I’m not saying there’s anything wrong with the cannabis culture, but some people don’t realize that the herb can do far more than intoxicate you or put you on a euphoric cloud. It’s much more potent when it’s used for meditative purposes, and there are ways we can enhance its meditative value.

There are things we can do to get the most out of it, and in my opinion, one of the best ways to really benefit from it is to set limits and use it responsibly.

The National Organization for the Reform of Marijuana Laws (commonly known as NORML) has provided guidelines for responsible cannabis use, and whether we use it recreationally, medicinally or meditatively, setting some limits is always healthy.

In my opinion, the reason it’s illegal in the first place (beyond the fact that interests behind the scenes seem to make more money that way) is because the planetary controllers don’t want people to use it to expand their minds.

In some cases, cannabis leads people to question their reality and the motives of the people in power.

Discoveries are made about the things the controllers are doing to keep us oppressed and the things we can do to break their programming and start embodying (and expressing) higher aspects of our consciousness, and the interests who profit from humanity’s unawareness don’t want cannabis to awaken people.

They don’t want people to realize what this herb and its cousin, hemp, can do for our society and our spirituality, and this is why so much effort has been made since the thirties to keep it illegal. Luckily, the world is waking up and cannabis is becoming legal in more and more places.

People have been saying since the seventies that it’d be legalized any time now, and now that it’s legalization is finally picking up speed, its users might want to keep a few things in mind when it becomes legal everywhere.

One is that, in the beginning at least, the system will probably still find ways to oppress users. DUI checkpoints could become more common as the controllers try to arrest people for driving under the influence of marijuana, which isn’t recommended but still isn’t nearly as harmful as driving drunk.

Other legal measures will probably be taken to make things harder for users, and drug tests could potentially increase. Big industries, like tobacco and alcohol, will try to dominate the cannabis market, because it’ll have been regulated and opened to the capitalist vultures who see dollar signs everywhere they look.

This isn’t necessarily a bad thing, but it isn’t really a good thing either. I don’t think the system (or the big industries it protects) should have any control over cannabis, but there are a few necessary evils we’ll have to accept if we want to diminish the legal consequences of its use, which should’ve never existed in the first place.

Those consequences only exist to benefit the people in power, but luckily, they’re falling away as more states (and countries, like Uruguay and Jamaica) legalize.

When it comes to spiritual use, we might want to practice a few things that’ll help us get the most out of the herb. I’d recommend exercising before using it and doing breath work during, because exercise gets the blood pumping and the spirit flowing and breath work can increase that flow even more.

Some spiritual and recreational users listen to (or play) music while they consume it, and while this is a great way to enjoy the herb, we might want to sit in contemplative silence while using it every now and then. Cannabis enhances music or anything else we do while we enjoy it, but it can seriously amaze us if it’s used for purely meditative purposes. 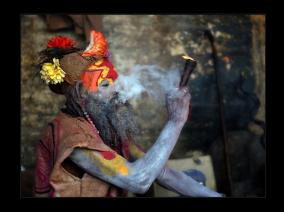 It was used in a lot of ancient cultures to expand the users’ minds, and I’m sure they enjoyed music or other spiritually rooted activities while they used it too. We can use it to enhance music every now and then, but I’d recommend using it primarily for spiritual exploration.

Music is great, but like Rumi and a few other spiritual teachers have told us, the best way to access the music within is to sit in silence and explore our consciousness. This is exactly what cannabis can help us do, but we can only benefit from it in the meditative sense if we’re willing to use it to enhance our meditations.

I look forward to the time when cannabis users don’t have to be ostracized or made to feel like outcasts.

The time is soon coming when passionate users won’t have to hide from the world or feel shameful about this lovely little herb that can expand our minds. Hopefully, the taboo that surrounds it will fade as it becomes legal everywhere and more people open up to the idea that it isn’t the devilish weed it’s been made out to be.

I’m sure mainstream society will still hesitate to fully accept it for a while, but with the legalization movement finally making notable progress after decades spent fighting for the freedom to use it without being treated like a criminal, society’s getting closer to accepting it.

Whether or not our culture accepts that it can be used recreationally or spiritually without the exaggerated side effects we’ve been programmed to fear, the people who are passionate about it will continue to explore their passion and strive to awaken others.

The world will awaken when it’s ready, and for now, those of us who know it isn’t evil (and, in fact, it can help our society in ways that are just becoming apparent) can continue to expand our minds and spread the truth about this demonized herb. One thing’s for sure: It’s ready to have its day in the sun.

It’ll eventually be accepted, even if it takes a while, and if we remember to set limits and use it responsibly (whether we use it recreationally or meditatively), we can show the world that sustained yet balanced use is possible.

No matter how you use it, rest assured that in time, you’ll no longer be oppressed by the authorities or the close-minded people who refuse to step outside of the preconditioned perceptual boxes that have been created for them by the powers that be.

The world’s finally opening up to cannabis, and as it does, those of us who’ve long supported it are learning that there are wholesome and destructive ways to use it.

If you use it wholesomely, you could awaken to things that’ll completely change your worldview. If you use it destructively, it could cause you to close your mind and depend solely on it for any love, spirituality or wholeness. There’s always a healthy middle ground, and even the most passionate user is encouraged to be responsible and respectful.

I’m a twenty-one year old writer, blogger, and channel for the creative expression of the Universe, and I created The Culture of Awareness daily news site.

The Culture of Awareness features daily spiritual and alternative news, articles I’ve written, and more. Its purpose is to awaken and uplift by providing material about the fall of the planetary elite and a new paradigm of unity and spirituality.

I’ve contributed to a few different spiritual websites including The Master Shift, Waking Times, Golden Age of Gaia, Wake Up World and Expanded Consciousness. I can also be found on Facebook (Wes Annac and The Culture of Awareness) and Twitter, and I write a paid weekly newsletter that you can subscribe to for $11.11 a month here.